The League of the South in Tallahassee, January 27th 2018

Courtesy of The Dixie Project at Christogenea 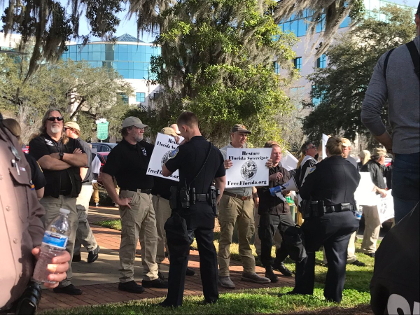 The League of the South had held a few events since Shelbyville, perhaps a social occasion or two and some participation in a few smaller demonstrations, but nothing major and nothing that we had the opportunity for which to participate. So for several weeks we looked forward to the planned Florida State Sovereignty rally in Tallahassee. Even better, this one was so close to home that we only had to visit a gas station once all weekend.

We spent a few hours Tuesday and Wednesday cruising the websites of Antifa and other Leftist organizations, and found not one mention of the League’s rally plans at the Old Florida State Capitol building at the intersection of South Monroe Street and the Apalachee Parkway. Not until Thursday did we hear that the Jewish agitators at the SPLC had made a notice of our rally on their website. But even more insipid than their articles, which are always written in a manner so as to cause alarm and encourage donations, are the uninspired comments made by an army of barely-literate Marxists.

While we suspect that such SPLC announcements are really calls-to-arms for the Antifa and other Leftist groups, apparently, Antifa in North Florida is not well organized nor very well-staffed. However, it is also quite apparent that Tallahassee is not the satellite of New York Jewry and haven for carpetbaggers that Charlottesville has become. But even in this university town the Left could hardly raise any interest in opposing the villains of Virginia.

The unusually cold winter, by Florida standards, had retreated north a week ago. So Saturday morning in Tallahassee was actually quite pleasant. The 56-degree low temperature was 17 degrees warmer than average, according to one major weather outlet, and the high would be 75. But understandably, cut-offs and sandals are not mentioned in the League’s uniform booklet.

So at 9:00 o’clock Saturday morning we converged upon a downtown parking garage, just a short distance from where we were to hold our rally advocating Florida’s sovereignty and secession from the unholy Union. Of course our enemies compare our objectives to the Lost Cause, but Rome also fell, and the Goths and Vandals had to start somewhere. The Roman generals and their sycophants also mistakenly thought that their empire was eternal. Disappointingly, there were only about thirty of us, a far cry from the numbers that were mustered in New Orleans, Charlottesville and Shelbyville. But we were nonetheless undaunted. During the forty-five minutes before we marched to the Capitol building we heard not one complaint or expression of fear.

Turning onto South Monroe Street, a large collection of Leftists, perhaps as many as a hundred-and-twenty or so, had already occupied the front of the building where we were supposed to assemble. At first I wondered how such a collection of vagrants, dope-heads, crack-house denizens, sodomites and assorted miscreants could gather at such an early time. Then I decided for myself that they must not have gone home to sleep the night before. Most of them looked like they awoke in an alley or a public restroom earlier that morning. The police immediately informed us that our location would be moved.

For the next two hours, or perhaps a little longer, there we stood with our signs and our flags, spread along the perimeter of a large chunk of sidewalk, and hoping to interface with the general public rather than devolve into a shouting match with the miscreants – that was the only available option at both Charlottesville and Shelbyville.

Later that day the Tallahassee Democrat announced in an article on its website that Heavy law enforcement presence keeps League of the South rally peaceful. To us, this is double-speak for Heavy law enforcement presence keeps Marxists at bay, prevents them from assaulting peacefully-assembling citizens, and saves them from being beaten down in the streets. But whatever may have happened, the Left has a history of intolerance and initiating violence, while the League of the South has a history of peaceful assembly of which no one in Tallahassee can legitimately complain.

So in spite of the Left-leaning media propaganda, the League had a day favorable to its objectives, that its members were able to interface with a large number of the Tallahassee public, many of which have sympathy for its cause. Many of the passing motorists and even a few pedestrians expressed approval throughout the morning. A couple of Southern gentlemen passing by even parked their vehicles to join us.

The Tallahassee Democrat was right about the police presence. It was overwhelming. There must have been two cops, or perhaps even three, for every protester on both sides. State police, Capitol police, police on bicycles, police everywhere on or above the streets around the building, in lines and in bunches. But all of this came with none of the oppression which we suffered in Shelbyville, and with the police actually doing their jobs, with none of the violence that we suffered in Charlottesville. In spite of over-bearing numbers, the Florida police are to be commended for allowing the demonstration, policing it effectively, and not employing excessive authority to silence us.

They did not allow us our flagpoles, they did not permit us to engage in literature distribution, but at least they didn’t hold us up for an hour for pat-down searches and property surrender like the police in Shelbyville had subjected us to, and then only to funnel us into a cage far separated from the public whom we are supposed to have a right to address. So at the least, Florida did not neutralize the purpose of our demonstration or our right to hold one.

The Leftists were holding signs and making chants which were absolutely irrelevant to our purpose that morning. Of course, the League of the South does stand for blood-and-soil nationalism and Christian ideals and morals. However that morning it was determined that our cause should be secession and State sovereignty for Florida. In that regard, demonstrating against us the Leftists defeat their own often-stated purposes.

For my part, I would not advocate any attempt to debate with Leftists in the streets, since they can never be persuaded by even the most obvious arguments of common sense. But one of our group, whom I shall not name here, took to a megaphone in the last hour and started repeating some anti-Federalist mantras. “The Federal government is not your friend”, along with short lines referring to the unjust wars, protection of corporations and the super-wealthy, and other points upon which the Hard Right and the radical Left generally agree actually confused many of the counter-demonstrators. A lot of them stopped chanting, some of them put their silly signs down, and stared at us with confused looks on their faces. The sight was at least entertaining, and allowed us to claim a more significant victory in the street, even if it is never mentioned in the media propaganda.