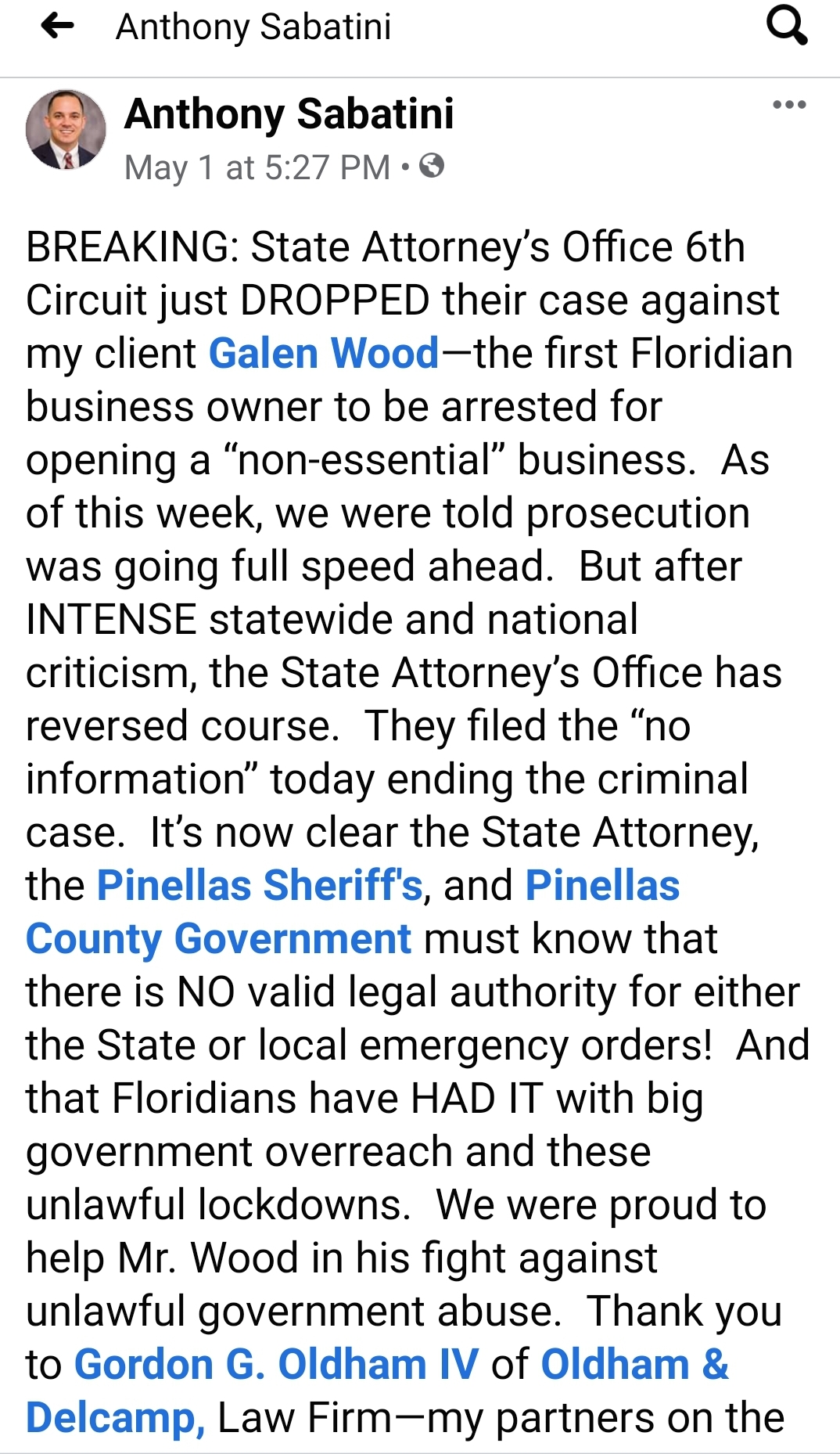 As Governor DeSantis gave his address on 1 May 2020, many Floridian’s anxiously awaited to see if he was going to open the State back up for business; unfortunately, his reopening was VERY limited and with no timeframe of full reinstatement of liberties in sight. The big change, if that’s what you want to call it, to our devastated economy, is allowing 25% capacity in retail stores and restaurants, ONLY TWENTY-FIVE PERCENT CAPACITY! Why even open and is the Governor listening to Floridians or is he doing as his puppet-master asks?

Do any of these politicians have a right for this severe government overreach? NO, NO & NO! There is absolutely no validity or legal authority given for either the State or local emergency orders and these corrupt political figures know as such. What gives Governor DeSantis or the POTUS the right to tell any Floridian that he or she can not work, can not provide for their families.

A reputed civil case law firm says that they have no right to do so. On 30 April 2020 the State Attorney’s 6th Circuit Office dropped charges against Galen Trent Wood of Pinellas County for “Violation of Emergency Order”. Mr. Wood was the first Floridian business owner arrested for opening his “non-essential” business during the State of Florida’s “Safer at Home” order. The Pinellas County Sheriff, Bob Gualtieri said to the Tampa Bay Guardian, “He wanted to become unreasonable, frankly, he was being a jerk about it, so he went to jail.”. Galen Wood went to jail, because he “was being a jerk about it”, about wanting to provide for his family. After local and national outrage, the charges were dropped and a precedence has been set for all future cases alike.

Another case in progress happened in Columbia County Florida on 1 May 2020. A local hairdresser bucked-the-system and opened her doors, only allowing a few people in her shop at a time, following the social distancing guidelines, but the line outside her door was 10+ deep. With the State’s unemployment rate skyrocketing, the website to file for these benefits has been down several times due to the high demand and an independent contractor, such as a hairdresser, is not even eligible for unemployment benefits.

“Congress shall make no law respecting an establishment of religion or prohibiting the free exercise thereof, or abridging the freedom of speech or of the press, or the right of the people peaceably to assemble and to petition the government for a redress of grievances.” If you know your constitution, you know this as the first amendment and it is quite clear that mayors and governors have issued these stay-at-home orders unlawfully. Political Theorist Lysander Spooner wrote in his 1867 book, No Treason: The Constitution of No Authority, “But whether the Constitution really be one thing, or another, this much is certain – that it has either authorized such a government as we have had, or has been powerless to prevent it. In either case it is unfit to exist.”

This current scenario is just one of the reasons that the Florida League of the South understands that the U.S. Constitution can not and will not save us. In order to be a free people, we must take back our rights from corrupt politicians and break off from the federal government that either calls the punches themselves or creates puppets to do the job for them.

Spread the word by sharing
41
41
Shares