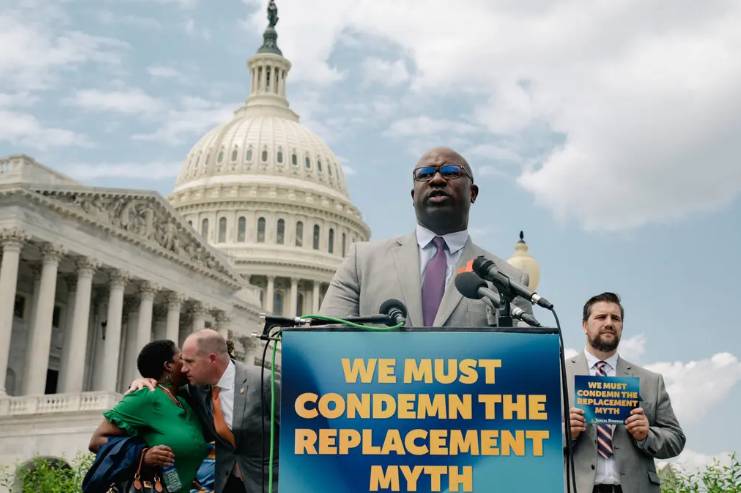 Now U.S. House Democrats are shrilly denouncing the so-called “Great Replacement” program as a “conspiracy theory” and have responded by attempting to legislate thought by making a provision to a recent gun control bill condemning the idea.

WASHINGTON — House Republicans voted en masse on Wednesday against a resolution condemning a white supremacist conspiracy theory, after Democrats tacked it onto a procedural measure to advance gun control legislation, effectively daring the G.O.P. to oppose it.

The resolution condemned the so-called great replacement theory, the belief that Western elites want to “replace” and marginalize white Americans, which apparently motivated the gunman who slaughtered 10 Black people at a supermarket in Buffalo last month. The measure, which also opened an hours long debate on legislation to prohibit the sale of semiautomatic weapons to people under the age of 21 and ban the sale of magazines that hold more than 15 rounds of ammunition, passed 218 to 205, with Republicans uniformly opposed.

The New York Times has in the past published articles denouncing any mention of the replacement of Whites in the U.S. and Europe as a conspiracy theory. But to the contrary, Joe Biden himself has admitted the purposeful plan to replace Whites in America, and has spoken of it admirably. The following video is from a C-Span taping of something which they had titled “Combating Terrorism”, but where Biden is speaking at least briefly about immigration.

The Florida League of the South vigorously denounces this tactic, whether purposely driven or unfortunate collateral damage.

Does this man, who claims to represent all “Americans” really care about the Southern White man and woman? You make the call. Then join us in defense of our people and our homeland.