The Florida League of the South is a Southern nationalist organization whose ultimate goal is a free and independent Florida republic. While political independence ranks highly among our goals, we are also a religious and social movement, advocating a return to a more traditional, conservative Christian-oriented Southern culture.

Most organizations founder because they lack self-definition and a definite goal. To reach our goal, we intend to create the climate for a free Florida among our people by 1) de-legitimizing the American Empire at every opportunity; 2) by proving our willingness to be servant-leaders to the Southern people; and 3) by making The Florida League of the South a strong, viable organization that will lead us to Florida’s independence.
Click here to continue

Click on the flag image below to learn why there is no freedom today and what can be done to remedy this.

Today’s sectional division and political unrest has only heightened the fact that the general government of these united States has and continues to unlawfully define the limits of its own power.

These repeated and ever worsening encroachments upon the lives, liberty, and property of the People of the sovereign States constitutes and evidences a clear design to enslave them under an absolute despotism.

Fed up with federal encroachment, regulation and theft that have caused your liberty to evaporate? Reform is NOT possible. An initiative has been created to petition the Florida State Legislature to affirm the right of Floridians to live free.

(NOTE: This petition is available to legal citizens of Florida only)

Feds Out of Florida 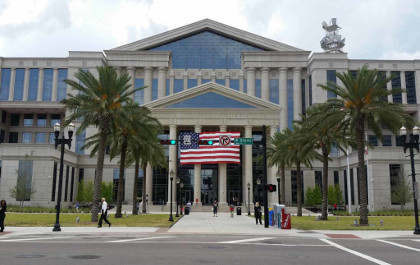 The sovereignty of the State of Florida is extremely important to the liberty and freedom of her citizens and should be taken very seriously.

The central government in Washington, DC was originally created by the sovereign States as servant government and was thus delegated few, specific powers. The States and the People retained all other powers. But sadly this government has been gradually perverted into a machine for control of the states. The servant has been exalted above its masters. Military force, court decisions, laws, and executive orders have overturned all of this. Just as our ancestors feared, the central government has become supreme, defining the limits of its own power. The member states have been relegated to the role of mere departments in a nationalized system. This is not the Federated Republic bequeathed us by our Founders.

Now, the symbol of this usurpation of power, the U.S. flag, by law, flies in the face of our state sovereignty as a daily reminder of our subjugation. Florida State Statutes 256.01 and 256.011 exhibit blatant Big Brother behavior and must be repealed.

(NOTE: This petition is available to legal citizens of Florida only)